Following on from last week’s post summarising the beginning of our Chilean Adventure, our second week in Chile began with The Wedding! This was the catalyst fuelling the trip, the whole reason we were visiting Chile in the first place! 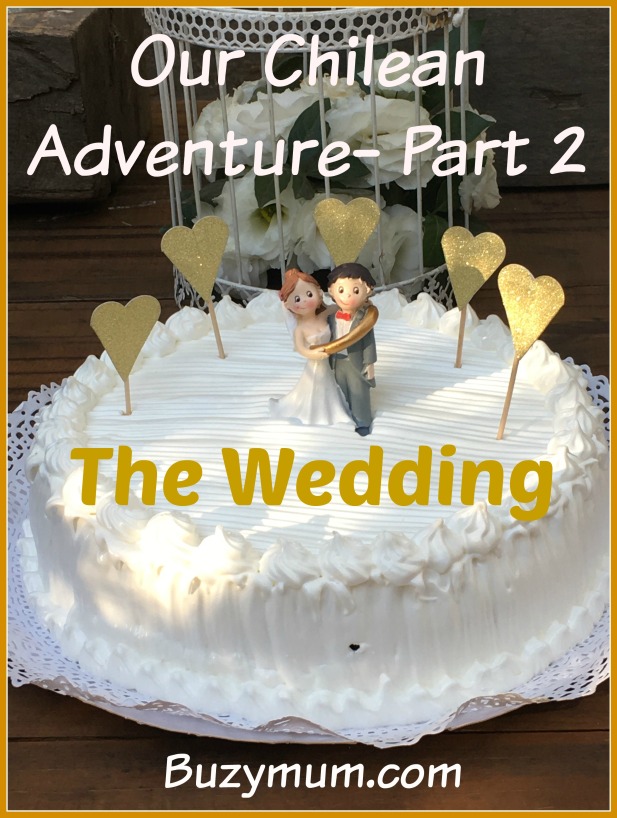 Pia stayed at her grandparents house, the night before the big day and Martin (my brother), remained with us at Pia’s uncle’s house, across the road. My mum and I were responsible for the (well practiced but still stressful) flower girl’s hair styles……. 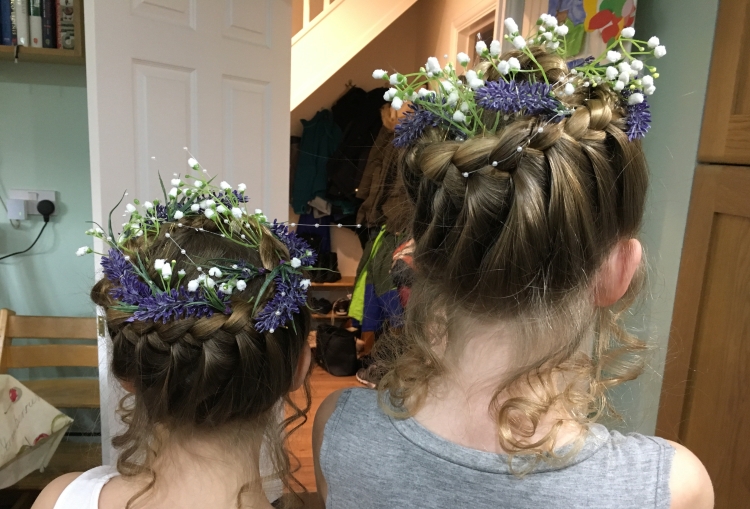 While J had the important (and somewhat difficult) job of ensuring that The Boy stayed clean prior to his important role of ‘Ring Bearer’ – his strategy was to dress him at the last minute, resulting in a morning of boredom followed by 10 minutes of panic!

By midday, we were ready to leave and looking gorgeous, (even if I do say so myself) ready to be whisked off to the church to greet the guests. I haven’t mentioned all the kissing that goes on in Chile yet, have I? Well, as a female, you kiss everyone on the cheek when you meet and the men shake hands initially, go in for a hug as they become more acquainted and once firm friends, kiss on the cheek too. Even the children do the same and formally go around and greet everyone as they arrive at an event no matter how informal. With around 150 guests arriving at the church, that’s a lot of kissing! Once everyone was seated, as my dad is no longer with us, I took his role and walked my mum and brother down the aisle with the children following behind and Pia making her entrance with her dad, after them. Her dress was simple yet stunning with the theme of pearls and lavender running through the bouquet and accessories, a real natural beauty, I’m sure you’ll agree!

The children and J were sat behind mum and I, when I turned to see The Boy, dangling the ring cushion (with the rings tied to it) from the wing of his toy plane (he had to have something, I was warned these Catholic weddings can take some time!) by the ribbon and swinging it around! After some comic, loud whispering, head gesturing and a sharp ‘pay attention to your son’ look, J swooped into action and quickly rescued the rings, narrowly avoiding disaster!

The Padre was a jolly chap and though he didn’t speak a word of English, he did his best to animate his initial address to the congregation by pretending to row a boat! He rowed only on one side while turning a circle, signifying that in a marriage, both parties need to contribute, otherwise, you will just go around in circles! Then it was the turn of a few close friends and family (including me) to contribute. First a reading from one of Pia and Martin’s close friends, then a duet sung by Pia’s mum and sister (I was nervous before and hadn’t realised that they would be singing, they were brilliant and now I had to follow!) and finally I stood and read. Lou had given me some tips from her class assembly where she had performed amazingly, “Mummy, you need to speak loudly, proudly and a little bit slow.” She told me, and it was great advice! Luckily, I didn’t stumble over my words or fall down the steps afterwards, in my far-higher-than-I-would-normally-wear wedges!

The vows were said, the rings given, the register signed and finally, communion was held for those wishing to participate. We followed the happy couple out of the church and into the 34 degree heat for a few photos and waved them off to the reception venue. 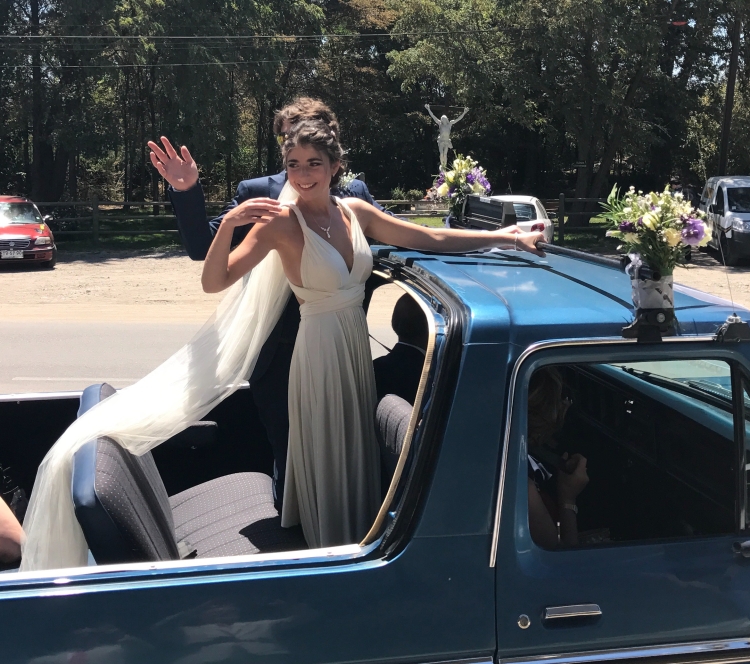 Unlike the majority of wedding venues in the U.K., this one had a pool, plus guaranteed weather to be able to use it! As soon as the formal photos had been taken, the kids jumped straight in, it was the perfect way to keep them entertained on such a hot day!

The first dance was beautiful. Pia is a dancer but my brother…….not so much!! It was a waltz with twirls and flourishes, performed with grace and beauty. The majority of grace and beauty being that of the bride while the groom concentrating on standing in the right place and not tripping anyone up (he did a good job!).

The parents join in, followed by everyone else, signifying the start of the party! The afternoon continued with cocktails and canapés, meeting lots of new people, practicing our Spanish, dancing and chatting. More guests were taking to the pool as the afternoon continued to heat up (in Chile, it doesn’t start to cool down until around 5pm during their summer months) and soon the bride and groom decided to join them. 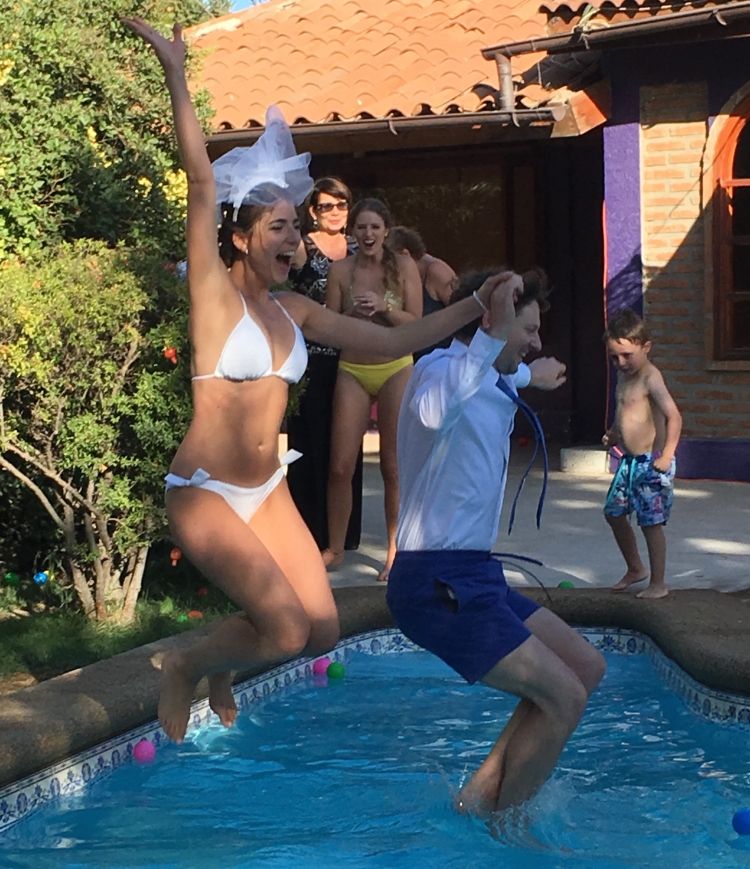 As the sun went down, the dancing stepped up! The kids hardly left the dance floor all evening and were thoroughly shattered by the end of the night.

It was a fantastic day in a perfect setting celebrating two special people’s love for each other. A day we will remember fondly as the main event on our amazing Chilean Adventure! 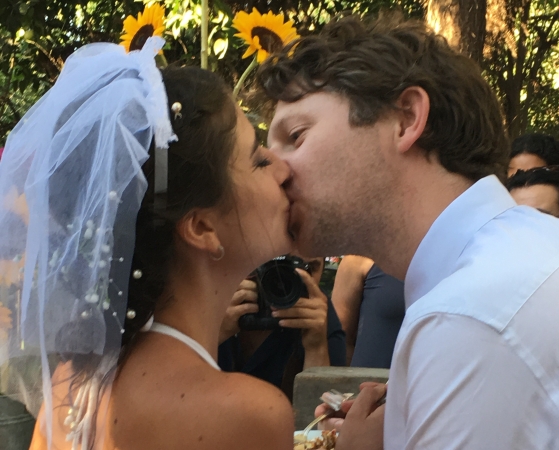 So I started this post with the intention of summarising the rest of our trip, but the wedding was such a big event, it took up the whole thing! Next week I’ll be covering our final week including a few days at the coast, bathing in arctic waters, kayaking, more food and pisco!!

Our Chilean Adventure – Part 2 – The Wedding

3 thoughts on “Our Chilean Adventure – Part 2 – The Wedding”